If you are in a season that feels barren and fruitless, take heart – over time, if we are persistent in our pursuit of God and obedient to his will and plan, we will bear fruit. Now might be a time when you are being pruned and watered and weathered so that your fruit will be both sweeter and more abundant when the appointed season comes. 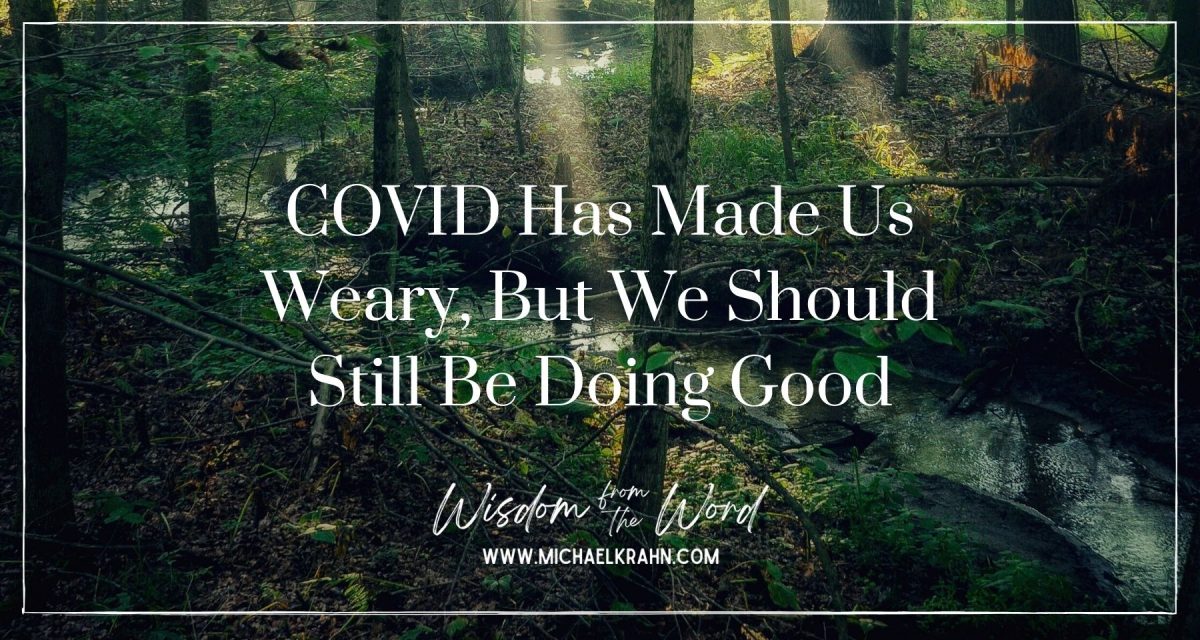 Seldom in the world’s history has the entirety of humankind been subjected to such mind-numbing and soul-crushing stress and chaos that has led to such persistent weariness. During this time, on days when I’m feeling down, it’s easy to look for the fruits of my efforts and wonder if I’ve accomplished anything at all. On those weary days, progress seems painfully slow and tangible “results” seem like a barren field on a foggy morning. This is quite opposite of what we desire, isn’t it?

We would all love for our efforts to result in immediate, visible, tangible fruit, but fruit is a fitting metaphor, and it is no accident that this metaphor is employed frequently in Scripture. As Psalm 1 points out, the blessed person is like a tree planted by streams of water that yields its fruit in its season.

How the Wicked and the Righteous Grow

In Psalm 92 we see a clear contrast between the wicked and the righteous. In v7 we learn that “though the wicked sprout like grass and all evildoers flourish, they are doomed to destruction forever,” while in v12 we see that “the righteous flourish like the palm tree and grow like a cedar” that still bears fruit in old age and is ever full of sap and green (v14).

The wicked have their day in the sun, their flash in the pan, their proverbial “15 minutes of fame.” They sprout like grass, which grows rapidly but provides little value and fades away just as quickly as it appeared. Although these people are often among the most prominent in the world and seem to be successful by worldly standards (we might even envy them sometimes), in the end, such people are doomed to destruction.

The righteous, however, are like palm or cedar trees. Palm trees take about five years to grow a trunk and another 15 years to produce coconuts, but they can live for hundreds of years. They represent slow growth and much fruit, just the opposite of grass.

Cedars are evergreen trees that can grow to over 150 ft and live up to 300 years. They are known for their alluring scent and have an ornamental quality because of their beauty. Cedar is also used for guitar tops and is known for its warm tone. Cedar trees represent beauty, warmth, and an inviting aroma. We might think of this aroma as “the fragrance of life” that is mentioned in 2 Cor. 2:16.

The Long Blessings of Slow Growth

In contrast to the wicked, the righteous grow slowly but they live long and fruitful lives. For such people, what often looks like a season of fruitlessness is actually a season of preparation. If we see a tree as only useful when there is ripe fruit to pick, we might see it as useless at all other times.

But trees are not useless during seasons when the fruit is not visibly emerging. During times of not bearing fruit, a tree is still being prepared to be fruitful: it is being pruned and watered and weathered, all of which will make the fruit sweeter and more abundant. Even the blessed person is not bearing fruit in all seasons but in the appointed season; there is a cyclical pattern to fruit-bearing.

If you are in a season that feels barren and fruitless, take heart – over time, if we are persistent in our pursuit of God and obedient to his will and plan, we will bear fruit. Now might be a time when you are being pruned and watered and weathered so that your fruit will be both sweeter and more abundant when the appointed season comes.

So, as for you, do not grow weary in doing good.