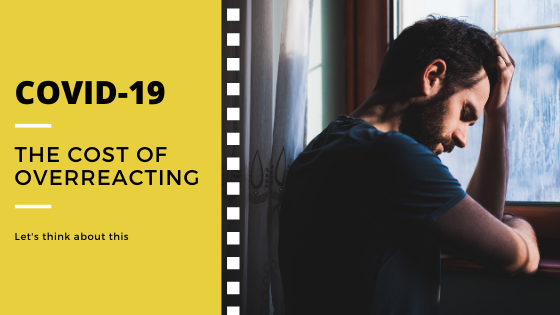 Several disclaimers before we get started. COVID-19 is real. People are dying because of it and we should do what we can to mitigate its effects. But approaching this with an “even if it saves one life we should do it” mentality is too simplistic. Action and reaction – if by saving one life you put another in danger, what is the right choice?

So I want to draw your attention to a couple of pieces I read yesterday that I would describe as “forcefully responsible” questioning about what is currently happening with the government’s responses to COVID-19.

The first was by Denny Burk, who asks, “Are policy-makers ‘encouraging mass civil disobedience’?”  Go take a look. I think he has a point. He quotes an article in the Wall Street Journal: “Decrees like those from the Michigan Governor’s office and their capricious enforcement run the risk of encouraging mass civil disobedience that will undermine the point of the orders.”

I’m seeing this here in Ontario, Canada as well. I know of a church that put a lot of thought, planning, and promotion into their drive-in Easter service, only to be given a big thumbs-down by the authorities a few days before the event. Why? If everyone stays in the their family units in their vehicles with the windows up, why can’t we do this? Millions of people are still hitting the McDonalds drive-thru every day. None of the workers I’ve seen in my town are wearing masks. Are they in yours? So if millions of people can interact within six feet of each other without face shields, why can’t a couple of hundred people park in the same place inside their sealed family vehicles?

We are told not to go to beaches, even though beaches would seem a natural refuge in a time like this – a place with wide walking spaces where we always keep our distance from others anyway. My family was warned about an $800 fine for going to the beach last weekend as we were stepping out of our vehicle about half a kilometre from the beach! We had no intention of walking on the beach, and since there was an OPP officer in a cruiser posted at the entrance, there was no chance we were going to modify our intentions.

People are cooped up and isolated. The mental health impacts will be far reaching and long-term. We can mitigate those effects by reasonably allowing – perhaps even encouraging – people to get outside and enjoy nature.

The second post I read was by Doug Wilson, who always titles his posts so delightfully. This one was called “This Shambling and Shameful and Shambolic Shamdemic.”

Explaining how all of this might be called a “shamdemid” he explains that:

“What I mean is the vast discrepancy between what has actually happened and what we were assured would happen. That discrepancy is the sham. Draconian actions were taken on the basis of these representations, and that is why the discrepancy is a hot issue. What the computer modeling experts predicted has not come to pass in any way that even remotely resembled their predictions, and which were treated as hard predictions by the politicians and decision-makers. And it cannot even be said that the computer modeling scare made us undertake certain heroic mitigation efforts necessary that would avert the predicted disaster because the models included mitigation efforts.”

That last sentence is massively important. To be clear, he’s not saying that there aren’t surges in some places. He isn’t saying people aren’t dying or that COVID-19 is imaginary. He’s saying that the earlier apocalyptic predictions, based on models that took mitigation efforts into account, were not even close to accurate.

And on these models decisions were made that are causing chaos in the world economy. And if you care about lives, you need to concern yourself with the economy. I’ve heard many people express the thought that “it’s better to overreact than to under-react.” This is true for some scenarios and false for others. We might all wear masks when we go out in public, and maybe this isn’t absolutely necessary, but there isn’t a lot of downside to doing so. On the other hand, if you overreact when it comes to the economy, things could get dark very quickly. It is well-documented that alcohol consumption and suicide rates increase during times of economic recession.

There is a cost to overreacting. We need to take that cost into account when shaping our present responses. Some studies have found that for every 1% increase in unemployment there is an equal increase in suicide rates. The unemployment rate in Canada rose 2.2% from February to March of this year. According to the numbers, that’s an extra 800+ deaths by suicide this year in Canada, and the unemployment numbers are going to go up quite dramatically in the coming month.

What’s my call to action here? Don’t follow blindly, follow intelligently. Look at a wide variety of views on the crisis. Discuss and debate. And as you’re doing all of that, don’t succumb to the fear and panic and anxiety that you see around you. Even if all the worst predictions come true,  all of God’s promises will still also be true. We still have hope and faith and love. That should cause us to love our neighbours and to love the truth – all truth. Even the truth about this crisis and our reasonable response.

4 thoughts on “COVID-19: The Cost of Overreacting”