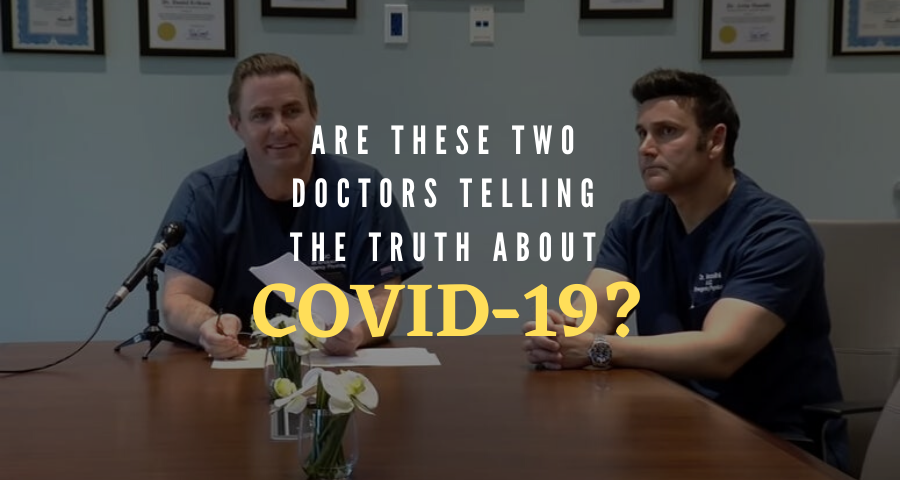 Here’s the biggest challenge we’re facing right now: There are no COVID-19 experts, only people gaining expertise. Thorough studies and reliably peer-reviewed evidence isn’t available yet so everybody is, in a sense, flying in dim light and doing their best to find an unlit landing strip.

As viral videos go this one was long and dense, but it was not filled with ideas we haven’t already heard. So why all the interest? It’s because these ideas were spoken by two experienced doctors with a combined 40+ years of study and practice in the fields of microbiology, biochemistry, and immunology.

The purpose of the press conference, according to Dr. Erickson, was to answer a question about how we are handling the COVID-19 crisis: “Are we following the science?”

My original plan was to analyze most of what was presented in the video, but I think that would be less helpful than examining how the information was presented and offering a couple of principles we should keep in mind and errors we should avoid in our evaluations.

Errors to Avoid(1) – Confirmation Bias
Maybe, like me, you initially greeted what you heard with enthusiasm. A lot of what was said confirmed thoughts I’d had, so it was easy to cheer them on. But here is the first trap we need to avoid: confirmation bias. “Confirmation bias is the tendency to search for, interpret, favor, and recall information in a way that confirms or strengthens one’s prior personal beliefs or hypotheses.” (Wikipedia)

It is all too easy to affirm the opinions of those who have come to the same conclusions you’ve come to. However, that doesn’t make your conclusions more true or more valid – it just means others are having the same thoughts. It doesn’t make you conclusions any less true either, but we have to be careful to avoid the error of being fully convinced based on confirmation bias, especially when what we’re believing is based largely on the extrapolation of anecdotal evidence.

Errors to Avoid(2) – Anecdotal Evidence
An anecdote is a short and interesting story about real events. “Anecdotal evidence is evidence from anecdotes: evidence collected in a casual or informal manner and relying heavily or entirely on personal testimony.”  (Wikipedia)

Anecdotal evidence, presented honestly, is, by its nature, true but also limited. It is a true telling of a real experience, but it cannot be proclaimed as universally true. Anecdotal evidence should never be discounted, but neither should it be given top position on the altar of truth. It is often given that place of importance out of ignorance, or laziness, or sometimes intentionally in order to weaponize the information to suit our bias.

A better way is to present this type of evidence humbly and in context. Done this way, it can provide a great starting point to uncovering the wider truth. And if anecdotal evidence is to be acted upon at all, it should be acted upon humbly and with an openness to more evidence, especially contravening evidence.

Here is what’s most important to understand about what these doctors are saying: their presentation is full of verifiable numbers but also much speculation based on their limited view of a global pandemic.

The Discerning Eye
The discerning eye is always fixed on separating evidence that has proven to be true from that which is anecdotal, relying more heavily on the former and treating the latter with caution. Please make sure you’ve done the hard work of discernment before you crusade either for or against these doctors.

As I mentioned, I am not going to spend time here weighing everything that was said in the press conference. I have my opinions, but I have to remain constantly aware of confirmation bias. I see clearly where statistical evidence was used to confirm certain statements, but I also see where anecdotal evidence was used unwisely to come to bold conclusions that run counter to the current consensus.

Conclusion
So, are these two doctors telling the truth about COVID-19? They are telling SOME truth about it, yes, but they are also engaged in a lot of bold speculation based on partial or anecdotal evidence.

One thing we can agree on is that we’d like for what they’re saying to be true, wouldn’t we?

We’d like it to be true that the death rate is much lower than we’ve been told.

We’d like it to be true that the lockdowns are no longer necessary.

We’d like it to be true that everything can go back to normal and we can all venture out again without masks to embrace our loved ones.

Let’s hope it is all true. But since we’re talking about decisions that will affect, literally, billions of people, we must discern and discuss and weigh and push back, and we must do all of this with an abundance of humility, admitting that our knowledge of this disease is limited.

This humility was lacking in the presentation of doctors Erickson and Massihi, to their own detriment.

Postscript
In the end, the entire incident could have been more fruitful and less controversial if the doctors had said to the press: “Here’s what we’re seeing in our little corner of the pandemic. Here are a hundred leads for you to follow. Please let us – and everyone else – know if this is what’s happening everywhere.”

In that way they could have sent an army of journalists out to prove whether or not the anecdotal evidence provided was, in fact, more than anecdotal. As it was, they did their own cause a disservice by mixing the factual with the speculative. In the process they stirred up a lot of people who who didn’t take the time to separate the two and aren’t aware of their own confirmation bias.