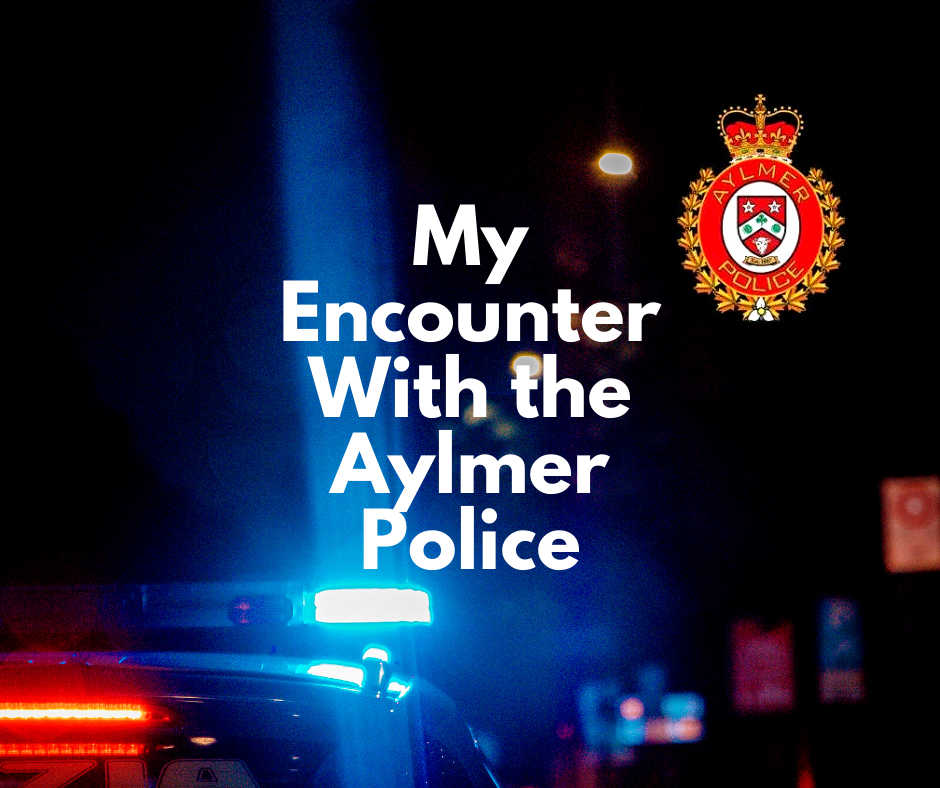 Yesterday afternoon I dropped my daughter off at work in town. Near the place she works I saw two Aylmer police cruisers behind the vehicle of an elderly women who looked to be in some distress. Recognizing the woman as a friend I felt it was my place to help, so after driving by I turned around and parked a hundred or so meters back, donned my mask, and set out on foot to see if I could be of assistance.

There had been a very mild fender bender and the other vehicle had already left. However, there was some unfinished business with my elderly friend. I said hello to my friend and introduced myself to the officers.

What happened next? I’ll tell you, but first allow me to admit something I’m a little embarrassed about in hindsight.  As I was turning around, I paused as I considered getting out of my vehicle. I second guessed whether I should try to offer assistance. Why? Well, I discovered I was worried about how my offer of assistance might be received. How would the officers respond, in these tense times, in the middle of a state of emergency and a stay-at-home order, to me entering this situation? I wondered if they’d be angry and if their response would be hostile.

I actually thought these things, and I’d like to say I’m not sure why, but the reason is kind of obvious to me. If you start a sentence with “It’s been a hard year for…” there is no end to the options for how to finish the sentence. But it really has been a hard year for police officers in North America. Closer to home, I haven’t heard much good about the local police in the past year either. Some even believe they are so awful that they’re worthy of intimidation and mistreatment. And so I discovered that my view of police officers has been tainted not by my personal experience, but by the events reported in the news over the last year.

But I got out anyway. I offered to help anyway. And I was immediately welcomed with open arms (I say that figuratively, of course). There was not a single negative note in their reception of my assistance. In fact, it was all gratitude and eager cooperation.

As I continued to enquire about what had happened, I discovered that these two officers had been models of leniency and decency and compassion throughout the encounter. For the sake of my friend’s privacy I won’t mention specifics, but I will say this: the officers, rather than ticketing her hundreds of dollars as they rightfully could have, instead issued three summonses for a court appearance where she will be able to explain her mistake and probably come away with no financial penalty.

Are You Still With Me?

I titled this post in such a way that your assumptions would be tested, as mine were yesterday. Be honest, you probably clicked here expecting a negative report, didn’t you? Because that’s almost exclusively what gets reported. That’s what is deemed newsworthy.

After the encounter I began to reflect on the other interactions I’ve had with police officers in my lifetime. There haven’t been many but there have been a few: an interview when I was 10 or 11 after it was suspected that a friend of mine had committed arson; a couple of speeding tickets over the years; more recently, being pulled over due to a misunderstanding. Every encounter I’ve had with police officers has been positive.

Now, I know other people have different experiences – experiences that would lead them to an appropriate skepticism and even legitimate fears in the same circumstances I encountered. I don’t fault them for that, but I should not discount my positive experiences on the basis of their negative experiences. Someday perhaps I will have a negative encounter with the police, and then I’ll write about that.

Are there bad-apple police officers? Yes.

And I hate to tell you this, but there is even a “bad-apple-whatever-you-are” too.

The problem is that at this point we’ve heard so much bad news about so many people that we’ve exchanged the benefit of the doubt for the assumption of hostility… and that’s not good.

Let’s make it a good news day! In the comments below, feel free to share a positive experience you’ve had with law enforcement.

9 Replies to “My Encounter With the Aylmer Police”