“This story is not a call for all Christians to sell what they have and give it to the poor. It is a call for all whose hearts are enslaved by the idol of materialism to smash that idol so they can follow Jesus.” Continue reading… 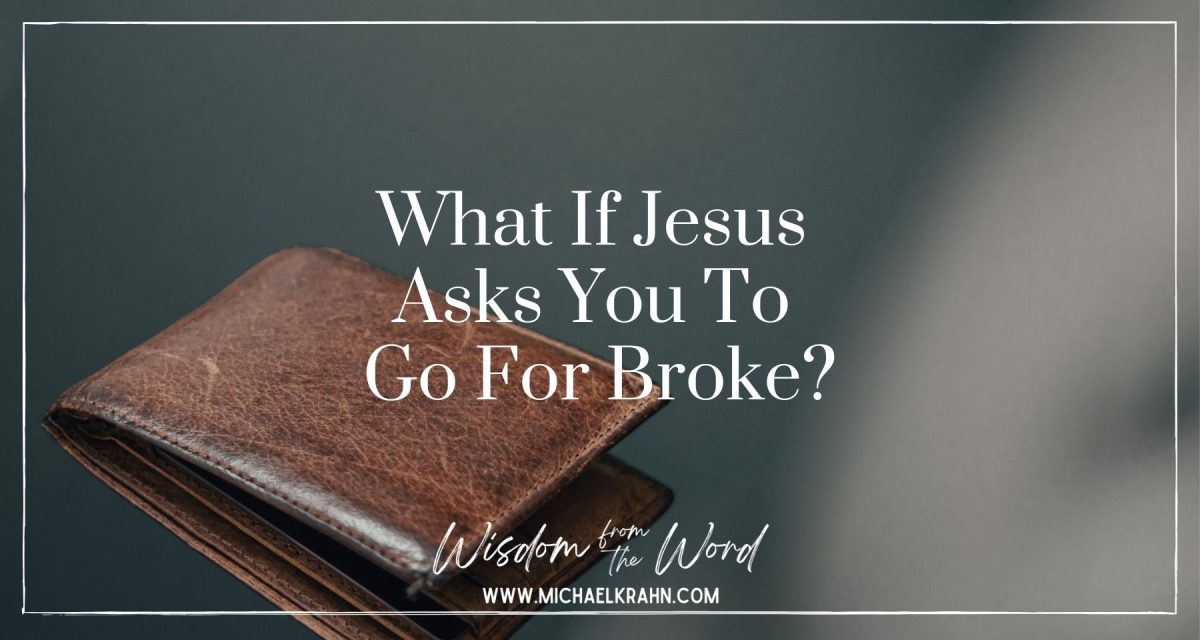 Jesus tells the story in Luke 14:16-24 of a man who is throwing a great party. He is disappointed to find that the people at the top of his guest list seem uninterested in attending. They make one excuse after another and ask to be excused. The party is not their priority. He then sends invitations to those who are poor, crippled, blind, and lame. With space still remaining, he casts the net even wider and keeps inviting people until his house is full.

The story serves as an illustration for people who are apathetic towards the kingdom of God because they have carved out a comfortable place for themselves in the kingdom of the world. These people are generally wealthy and warm and can’t imagine a better life than the one they possess at present. (You might say they are living their best life now.)

Where is Your Trust?

Now, I do not believe that Christians must be poor in order to be holy. I do, however, believe that we are sometimes in danger of turning from God by placing our trust in our efforts, our income, and our possessions. It happens slowly and with great subtlety, but it does happen. And we are in danger, living as we do in a time of unparalleled prosperity.

Jesus came to his own and was rejected. The Messiah, the one for whom they claimed to be waiting had come to them, but they were too wrapped up in the things of this world to take notice. Not only did they not take notice, they rejected him and had him crucified because he threatened the comfortable status quo.

In Luke 18:18-25 Jesus provides a case study for the earlier party story. A wealthy ruler asks him how he can be saved. After some preliminary conversation, Jesus offers him a way to obtain what he seeks. “One thing you still lack,” Jesus says, “Sell all that you have and distribute to the poor, and you will have treasure in heaven; and come, follow me.” The man becomes suddenly sad because he is extremely rich.

Jesus gives many warnings about riches, in one place calling money deceitful. It can be a lure that looks enticing but hides the enslaving hook. And yet he never says that it is a sin to be wealthy, only that being wealthy comes with its own set of hazards.

Some wealthy people work hard in a chosen field. They are determined to honour God, encourage people, and practice generosity. These people are often blessed by God with even more wealth, which they use not to feed their egos but to honour God and help those in need. God has blessed them with wealth and they, in turn, use that wealth to bless others.

Others make grand financial goals – they desire to be rich for the sake of being rich – and then pursue whatever means will lead to that end. These also often become quite wealthy, but in the end, they are destroyed by what they accumulate. These people rarely bless others, unless appearing to do so will somehow further benefit them financially. In the process, they do not honour God and are not blessed themselves. They can appear to be very moral people, but they are condemned by their love of money, which has become more important to them than God himself.

The Idol of Money

This was a problem for the rich ruler in the story. Money had become his idol and it was necessary for him to destroy that idol if he wanted to follow Jesus. This story is not a call for all Christians to sell what they have and give it to the poor. It is a call for all whose hearts are enslaved by the idol of materialism to smash that idol so they can follow Jesus. Jesus calls us to follow him, laying down our lives and possessions at his feet for him to use for his glory.

What if he asks us to go for broke?

Are we willing to place our trust fully in him to provide?

I must ask myself these questions on a regular basis to test the resolve of my heart. I have so much to be thankful for. Am I thankful? And am I holding my life and possessions loosely so that Jesus can use what he needs at the time of his choosing?

“How difficult it is for those who have wealth to enter the kingdom of God!” May we never assume those words were spoken only for other people and not for us.