“Even if Canada falls into ruin, the true Kingdom to which you belong will not have shrunk one bit. It will still be the same eternal and glorious Kingdom it has always been.” 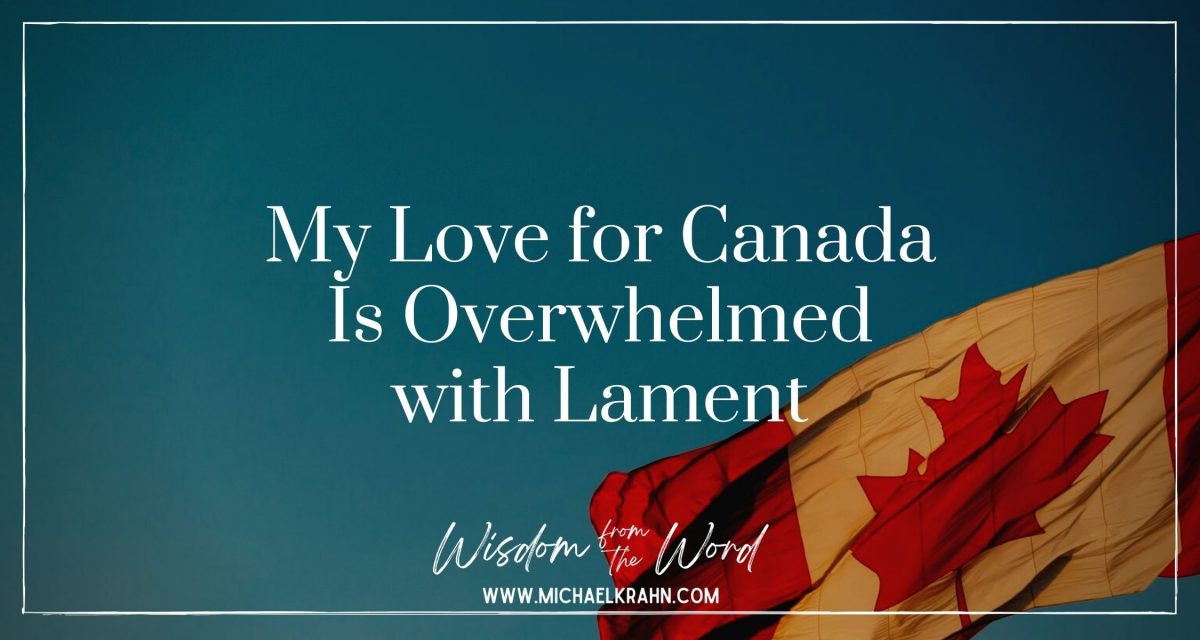 (This article was originally published at The Gospel Coalition Canada)

We live in a dark period of Canadian history. These last days have broken my heart as I’ve watched the many on-the-ground live streams and news reports about what was happening in Ottawa.

I have experienced a mixture of anger and lament that has overflowed into tears more than once.

You see as far as kingdoms go, my primary loyalty is to Jesus and his Kingdom. Canada is a distant second but nonetheless still second. And after observing my reactions to recent events, I wonder if perhaps my country is a closer second than I thought! Canada is a nation I love so much that I have been brought to tears.

We are not large in population, but I am not sure any other nation is known for having hearts as big as ours.

We keep the peace and exude humility.

In other countries, displaying our flag makes us instant friends.

Even as I write, moments of personal Canadian pride well up in my eyes. I love Canada; I am proudly Canadian.

But the tears I shed over last weekend were of a different kind because what I saw did not match the detailed character profile I have assembled in my memory from my innumerable positive and, to this point, very common and normal Canadian experiences.

Canada is a nation that is respected around the world for many good reasons. Many of us take this for granted and seem to more often focus on Canada’s failures and imperfections than on its many honourable traits.

In 2 Chronicles 7:14, God says that “if my people who are called by my name humble themselves, and pray and seek my face and turn from their wicked ways, then I will hear from heaven and will forgive their sin and heal their land.”

This was a promise made to Israel as a nation, not to Canada as a nation; Canada as a nation is not “God’s chosen people.” But within this nation are people who belong to the Kingdom of God. And if those of us who claim to belong to that Kingdom will humble ourselves, pray, and seek God’s face and turn from the paths that lead in the opposite direction, God will hear from heaven and forgive our sins.

And if we do this, inevitably, healing will follow. We are going to need A LOT of healing in the years to come. That means we are going to need agents of healing, and of peace, and of reconciliation. And if there is to be repentance and healing and unity in our nation, it should start in its churches.

And yet we find ourselves in a moment where new divisions are still taking shape. How many of us are at odds with someone right now that we never thought we’d be at odds with?

What’s worse, I sense that we are not even finished hurting each other yet, which means that healing cannot begin. We cannot let this become the new normal in the body of Christ.

Long-standing friendships are cracking under the strain of immense pressure from all sides.

Agreeing to disagree seems to have been taken off the table of options.

Neutrality on any issue is now considered cowardice on every issue.

What I am experiencing most these last four weeks is the deep sorrow of grief, and that is now working its way out into lament, which is a passionate expression of the same.

So here is my attempt at public lament, while trying to avoid the trap of side-taking and the who’s right-and-who’s-wrong warfare that seems to have overtaken every moment of time in the public square for the last four weeks.

There are certainly issues involved where one must take a side and clearly, one side is more correct than the other on any number of points. I don’t mind discussing, debating, and processing those, but not here and not now. Here and now is the time to lament the drama, damage, and division that the last two years, and especially the last four weeks, have brought upon us.

1. I lament the kingdom confusion that is present in the hearts and minds of many Christians.

To ply the old cliche: this might be where we live, but this is not our home (John 18:36; Phil. 3:20; Heb. 13:14). Even so, I do not lament those fiercely patriotic Canadians whose hearts are committed to the Kingdom of God while also loving the nation of Canada.

We should fight for Canada as as good citizens. Even while in exile we should seek the good of the nation in which we live (Jeremiah 29:4–5,7). But we must stop fighting for Canada as if it is our only hope for peace or salvation.

Even if Canada falls into ruin, the true Kingdom to which you belong will not have shrunk one bit. It will still be the same eternal and glorious Kingdom it has always been.

2. I lament the deep divisions that have formed in families and churches.

Satan has successfully agitated; he has baited us in opposite directions and we have taken the bait and are now being pulled apart by forces we don’t fully comprehend. It is not too late for any of us to apply the supernatural love of Christ to this natural strife.

Neither do I lament every expression of defiance by my fellow citizens. We are commanded to speak the truth in love (Eph. 4:15), and we are not exempt from practicing this command under any circumstances. But those who defy lightly and speak carelessly will answer for every word (Matt. 12:36).

Our Prime Minister has viciously berated those he is called to serve, addressing them with a disdain that is unbecoming of a man in his position. In the streets, many have flown the flag of disdain in response, and this is no better.

“Know this,” the biblical writer James says, “let every person be quick to hear, slow to speak, slow to anger; for the anger of man does not produce the righteousness of God” (James 1:19-20).

Unrighteous anger will never move the dial in the right direction but the grace of Christ can transform the hardest heart.

What Are You Lamenting?

I cannot help but think I am not alone in this lament. Will you join me in lament and prayer for Canada and the churches within Canada?

Photo by Hermes Rivera on Unsplash

One thought on “My Love for Canada Is Overwhelmed with Lament”