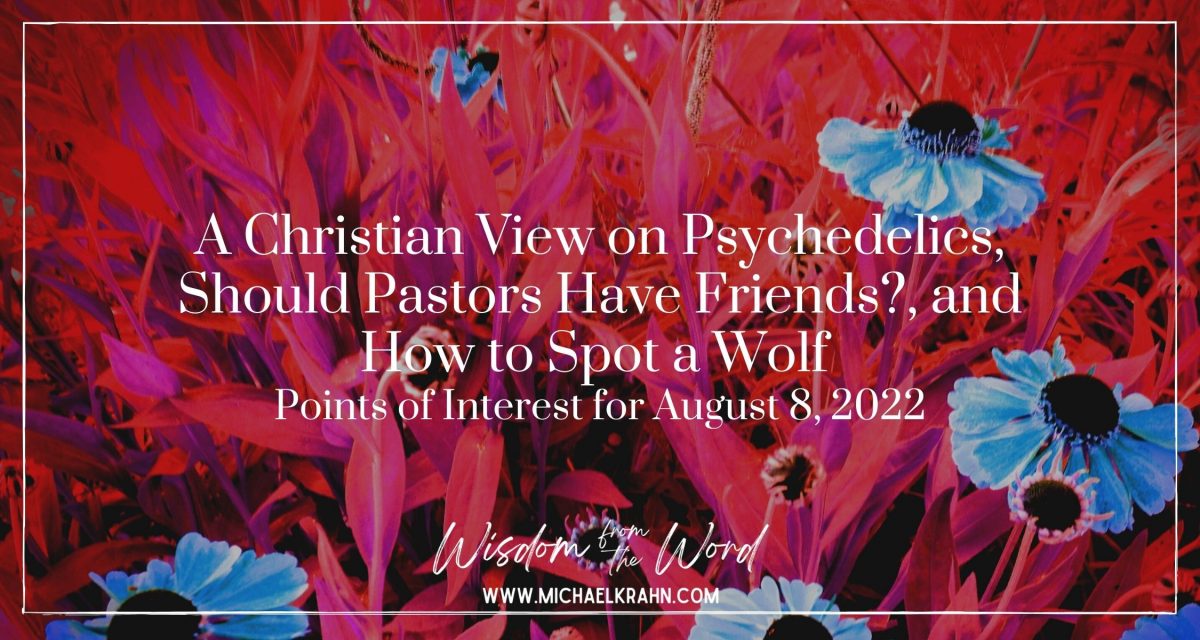 Pastors Should Have Friends in Church. Do They?

This is an oft-reported problem in churches. I am grateful that I pastor a church in which so many of the congregants are also my friends. Clearly, this is how it should be, but too often it is not. Give this article a read to understand why.

A Christian View on Psychedelics

There is increasing interest – and therefore conversation – about the use of psychedelics. This article takes a look at the phenomenon from a Christian perspective.

“The Judeo-Christian heritage… teaches us that there is danger in such things, and that practices such as the ingesting of psychoactive substances put us in contact with a world of spirits that is not our assigned place. And yet Christianity fully validates that longing for a connection to the spiritual. The Scriptures make clear that this God-given hunger for the transcendent is meant to be satisfied by God himself, through Christ his Son, as mediated by the Holy Spirit.”

How to Spot a Wolf: Three Signs of False Teachers

Any seasoned pastor will find much to affirm in this article. When you see the signs listed below (and in the rest of the article) ring the alarm bell until somebody notices. You may be seen as the “bad guy” in the situation at first, but you will end up saving the church a lot of time and hurt in the long run.

“Watch for a pattern of pursuing church leadership positions that seems unhealthy. Watch for a charming charismatic personality that in the past has left a disproportionate number of disillusioned and wounded people in its wake. Watch for claims to and apparent demonstrations of the kinds of spiritual power valued in the church, but which encourage a troubling dependency on and loyalty to the leader(s). Watch for a group forming around a leader, noticeably comprised of susceptible, spiritually weak members, that begins to manifest distrust in godly church leaders. Watch for a pattern of conflicts with godly leaders and resistance to submit to leaders in general.”