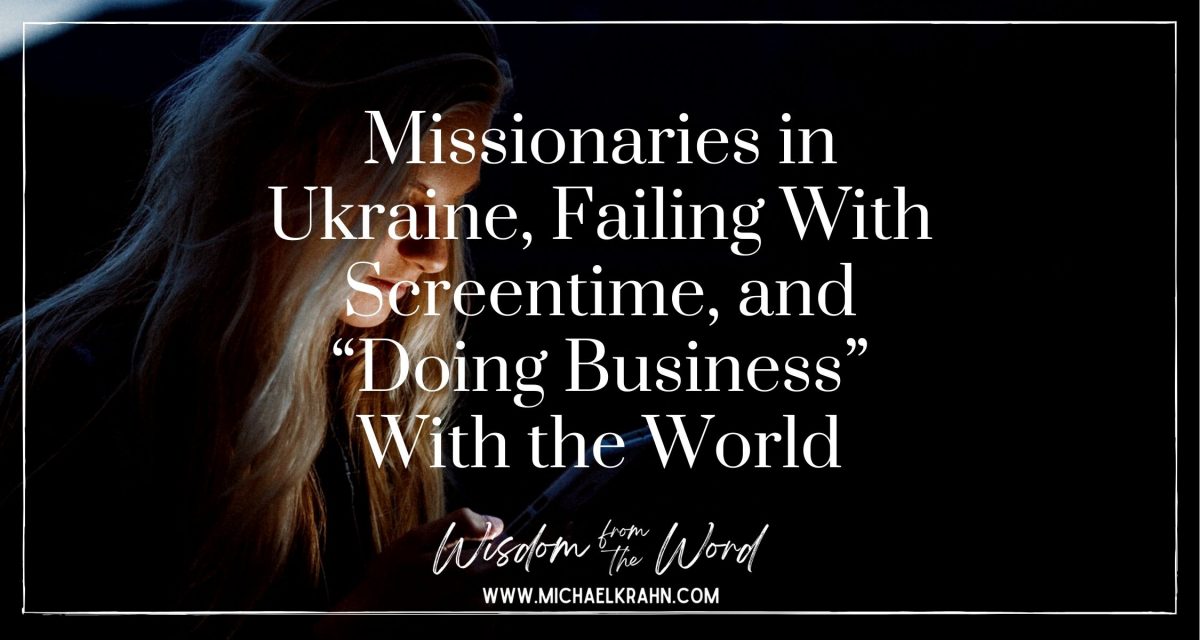 Vasyl Ostryi: To Stay and Serve – Why We Didn’t Flee Ukraine

Here is a first-hand account from missionaries on the ground in Ukraine.

“We have decided to stay, both as a family and as a church. When this is over, the citizens of Kyiv will remember how Christians have responded in their time of need… We will shelter the weak, serve the suffering, and mend the broken. And as we do, we offer the unshakable hope of Christ and his gospel.”

Tim Challies: When Parents Feel Like We Are Mostly Failing Most of the Time

Over the last year, I feel like I’ve made progress on managing my screen time, but every so often I realize that I’ve fallen into the same bad habits. Does it work the same way for you? We also struggle to manage our kids’ screentime, and in this article, Tim Challies tells us why that is.

“Most of us hesitate to properly manage our children’s use of their devices at least in part because we don’t care to manage our own. There’s nothing intrinsic to being a parent that gives you the right to watch endless amounts of YouTube while capping your kids at a half hour. Though we hate to admit it, much of our children’s behavior is learned behavior. If you want to know who they’ve learned it from, you should probably start with the person in the mirror.”

Robert Rothwell: Can Christians “Do Business” with the World?

I’m seeing some church leaders promoting a separate Christian marketplace or numerous Christian “micro-economies” to remove and protect the church from the world and its systems. While this might seem to have some merit on the surface, and while we should indeed distance ourselves from obvious evil and we do business, these ideas don’t seem to hold up in light of scripture. There are several good quotes below, but the whole article is worth reading.

“Paul’s clarification on the matter shows that he does not want us to remove ourselves from the world. He wants us to associate with sinners—not in endorsing or joining in their sin, but in making ourselves available to them so that they can hear the gospel… Therefore, because we are not to separate from the world into a Christian ghetto, we have to participate in the world’s economy and do business with our non-Christian neighbors. There is no way around it.”

“Jesus commended the paying of taxes to the very authorities He knew would soon crucify Him. The Roman Empire was not merely non-Christian—it was anti-Christian… Since Jesus and Paul would never tell us to do anything that involves us in sin, we may deduce from these passages that Christians are not morally responsible if their tax dollars are used for sinful purposes. And if we are not morally responsible for what the government does with our tax dollars, we are certainly not responsible for what companies do with our purchasing dollars.”

Photo by Becca Tapert on Unsplash