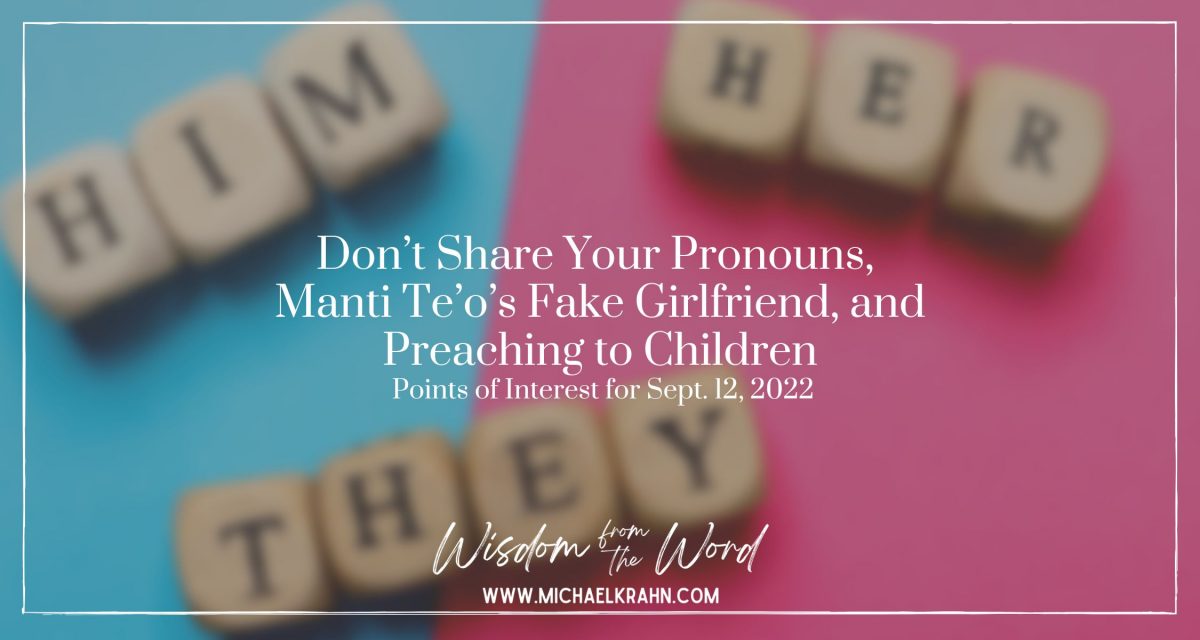 When Asked ‘What Are Your Pronouns,’ Don’t Answer

Here’s a take on the pronouns debate from a non-religious evolutionary biologist.

“Coercing people into publicly stating their pronouns in the name of ‘inclusion’ is a Trojan horse that empowers gender ideology and expands its reach. It is the thin end of the gender activists’ wedge designed to normalize their worldview. Participating in pronoun rituals makes you complicit in gender ideology’s regressive belief system, thereby legitimizing it. Far from an innocuous act signaling support for inclusion, it serves as an implicit endorsement of gender ideology and all of its radical tenets.”

I’m not into football (or whatever sport this is about) but this is a sadly fascinating story nonetheless.

“Most young adults today have grown up in a world where they’re known mostly by how they “present” themselves online. They take for granted that a certain distance between their real self and their online self is normal. In some ways, the many possibilities of a digital self have become more compelling than the boring old embodied self in all its limitations.”

“For adolescents especially, struggling through awkward bodily development, embracing a disembodied identity online can feel like a reprieve.”

Preacher, Don’t Forget to Speak to the Children

“Preacher, you should speak to the children in your sermons. It’s a fun and endearing task. I’m not always successful, but I try in every sermon to make a specific application to children. This helps them to perk up and listen. It helps them to know that their pastor cares about them. But most importantly, it communicates that the preached Word is for them, too.”

“Churches tend to prioritize what their pastors prioritize. So I’ve noticed that my applications to children have pushed the church as a whole to build intergenerational relationships.”