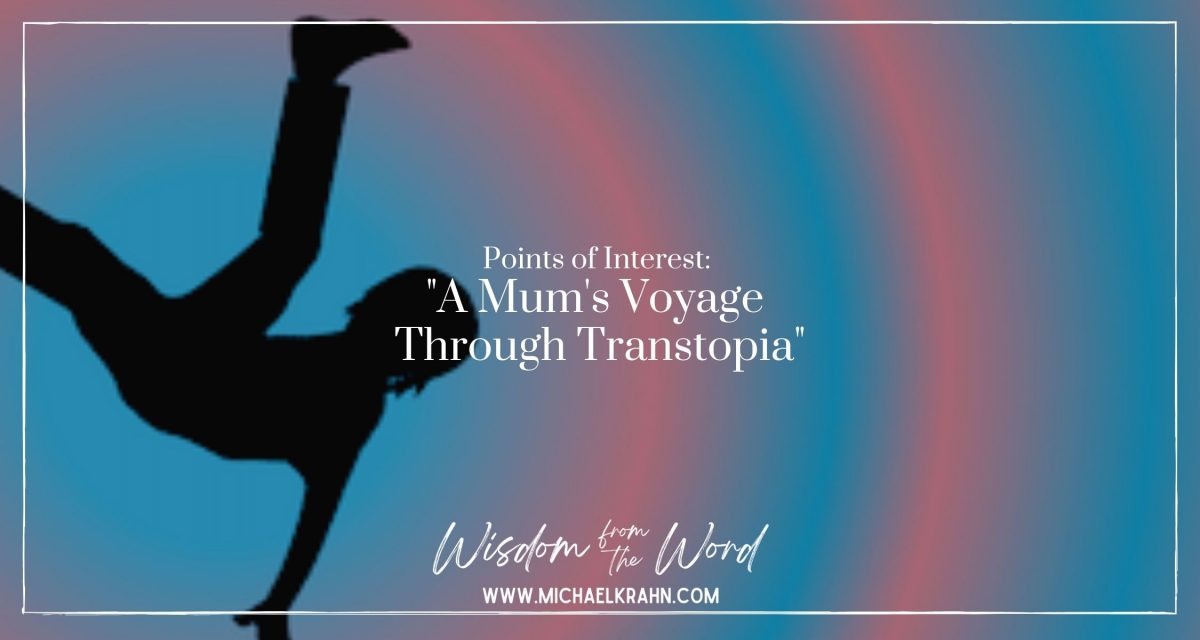 Today for Points of Interest I’m posting excerpts from just one article. It’s a very long but very important piece of testimonial writing. Similar, and in many cases almost identical, stories are surfacing at a rate too quick to keep up with. These are heartbreaking pieces of raw experience and painful parenting. So please read not just these excerpts but the entire article which can be found here.

Many of these stories are written not by religious people who might be thought to be “overreacting”, but by people who are politically and socially liberal – often with no steady religious beliefs undergirding their objections.

“Jessie still had her phone 24/7. I ‘trusted’ her, despite knowing that many of her friends were online half the night. I knew some of them self-harmed, or starved themselves, or posted half-naked pictures online. I know now that it isn’t about trust. No one ever thinks their child is doing that stuff. Social media cliques are like a spiral, ever more insular and self-serving. They are more than the sum of the parts of their users. The internet can be a great source of support, but whole online communities have grown up to normalise disturbing behaviours…”

“If my bright, happy child was vulnerable, anybody’s child can be vulnerable. You can’t ‘trust’ your child not to get drawn into a cult, any more than you can trust them not to get run over by a truck.”

“She seemed much happier after telling me and then went to bed, a million miles away, in her room next to mine. I went to bed too, and the darkness screamed at me. I got up again, and spent the night googling ‘transgender’ and crying. I tried to be open-minded. I wanted to support Jessie more than anything; to do the best thing to help her, but I was sure transition wasn’t the answer she needed. I told myself I was open-minded, but was I really? Was I in denial? I slept very little over the following weeks.”

“A link on that site led to the children’s trans support group, ‘Mermaids’. which is run by parents who believe their children are born in the wrong bodies. Their advice to confused teens, in the section ‘I think I’m trans, what do I do?’ is ‘you can speak to your GP without your parents being able to know if you are not comfortable with coming out to them yet.’”

“Everywhere I looked, the internet seemed eager to affirm that transition was a simple and marvellous thing, the one and only solution to all the problems of physical and social dysphoria. If you don’t support your child’s transition, parents are warned over and over again, they will probably try to kill themselves.”

“I learned that if you don’t believe a man can become a woman; if you are gender critical, you will be called a TERF, transphobic and told to ‘educate yourself’ at best; ‘die in a fire’ at worst. I became familiar with the term ‘die cis scum’ (‘cis’ are non-trans people). I learned that if you are a lesbian who doesn’t want to give fellatio, you are transphobic. You may be called a cisbian and you are responsible for the ‘cotton ceiling’. Men get pregnant and you should say ‘chestfeeding’ not ‘breastfeeding’. Vulva cupcakes are violent. Women who menstruate should be called ‘menstruators’ so as not to trigger transwomen who cannot menstruate, or transmen who don’t wish to be reminded that they do. The term ‘female genital mutilation’ is ‘cis sexist’…”

“Often, middle-aged people with names like Misty or Crystal will be the ones helpfully explaining this to confused ‘non-binary’ youngsters. If your child thinks they’re trans, there are a host of interested adults out there. They’ll help you select underwear, they’ll advise you to start transition as early as you can. Some will advise you to keep your feelings from your parents because they may become ‘crazy, hateful people’ if you come out to them. Worried siblings are told to keep quiet if they don’t want suicide on their hands. A few clicks will get you tips on how to get a binder without your parents knowing; some sites will even post you a second-hand binder for free. Tips on how to get hold of hormones illegally online and how to get ‘top surgery’ quicker by lying to a therapist are just a few clicks away.”

“I did try to find Jessie a therapist who would help her reconcile with being female. The only openly gender critical therapist a Google search threw up lived in Texas. No use to us, then. I was put in touch with several people by email, but I could find no-one who worked in our area. Those I did communicate with were wonderfully supportive but asked me not to name them, not to give out their email address or talk about them. The message was clear – publicly questioning Transtopia could be professional suicide.”

“I tried to give her support and let her know that I would always love her, but I never wavered for a minute from the idea that a woman cannot ‘become’ a man. Jessie and I went out for walks, to the cinema; out to lunch. I watched her and thought how clever she was, how compassionate, how thoughtful, how beautiful. I couldn’t bear the thought that she might mutilate herself in pursuit of something she could never really have. I wore sunglasses far too often that summer, but it helped to hide my eyes.”

“Jessie wrote a respectful but trans-critical post on her Tumblr account, and two of her ‘transboy’ followers messaged her saying they had also been feeling that way for some time and asked her to tell them more. She is currently messaging with several young people who are experiencing gender confusion. I hope she can help them, as her friend Hazel and I helped her, to realise that your potential should not be governed by your genitals; that the problem is gender and the solution is to try to change the system, not yourself.”

After turning back from the journey, the daughter had this to say:

“Although at the time I didn’t appreciate it, the constant repetition of “you can’t be a boy” did me good. A lot of good. I had been spending too much time on the internet and I had got it into my head that somehow, biological girls could really be boys, if they “identified” as such (& vice versa).

As someone who’s always had a mostly realistic grip on the world, for some reason I had been pulled into a world where boys could become girls and girls could become boys. I felt that because I said I was a boy, I was a boy.

At the time, I felt that my mum not immediately calling me Jake and using male pronouns was horrible and transphobic. But in the long run, without her resistance, I probably wouldn’t be as happy as I am today, as I would still be thinking I was a boy and trying to “pass” as a boy (which I would never be able to do without body-altering hormones.)

I think that if I had changed my pronouns in September, and registered at my college as a boy I would be a lot more unhappy as I would constantly be trying to “pass” and I wouldn’t be making the friends I wanted to, as I would be trying to fit in with the “male crowd”. When I arrived at my college, making friends wasn’t my primary motive, however the friends I have made are almost all female, and I don’t think I would have those friends if I had been trying to fit in as a boy.

Most of all, understanding gender as a social construct has taken me a long way in my personal life, and in my ideas about feminism and the way women and men are treated, especially women by the trans movement.

I’m glad that I realised before it was too late, as I am now happier in my own body and identity. I think that as a whole, many girls who wouldn’t’ve identified as transgender 10/20 years ago are now thinking they are which is dangerous and harmful to them, and that talking to them maturely and explaining gender as a social construct could really help them.”